The countries with the largest petrochemical production capacities are China, India, Iran, Russia, and the USA. However, it does not mean that Poland does not implement any petrochemical investments. This market review presents how the refinery and petrochemical industry looks like and develops.

The condition of the petroleum market was undeniably influenced by the pandemic, which caused strong economic slowdowns. In 2020, global crude oil processing decreased by 9%. According to forecasts, the refinery and petrochemical industry will record further declines in the coming years. Countries that have the most effective and modern installations for processing raw materials and semi-finished products in their resources have the best chance for success. It is worth noting that the simple production of liquid fuels from crude oil is less and less important, and technologically advanced petrochemical products play an increasingly important role.

GlobalData’s analyses show that in 2030 the global production capacity of petrochemical products will increase by over 40% compared to 2020. Forecasts indicate that China will produce the most of them, followed by India, Iran, Russia, and the USA. There is no European Union country among the largest countries in terms of planned petrochemical investments, but this does not mean that such projects are not implemented. 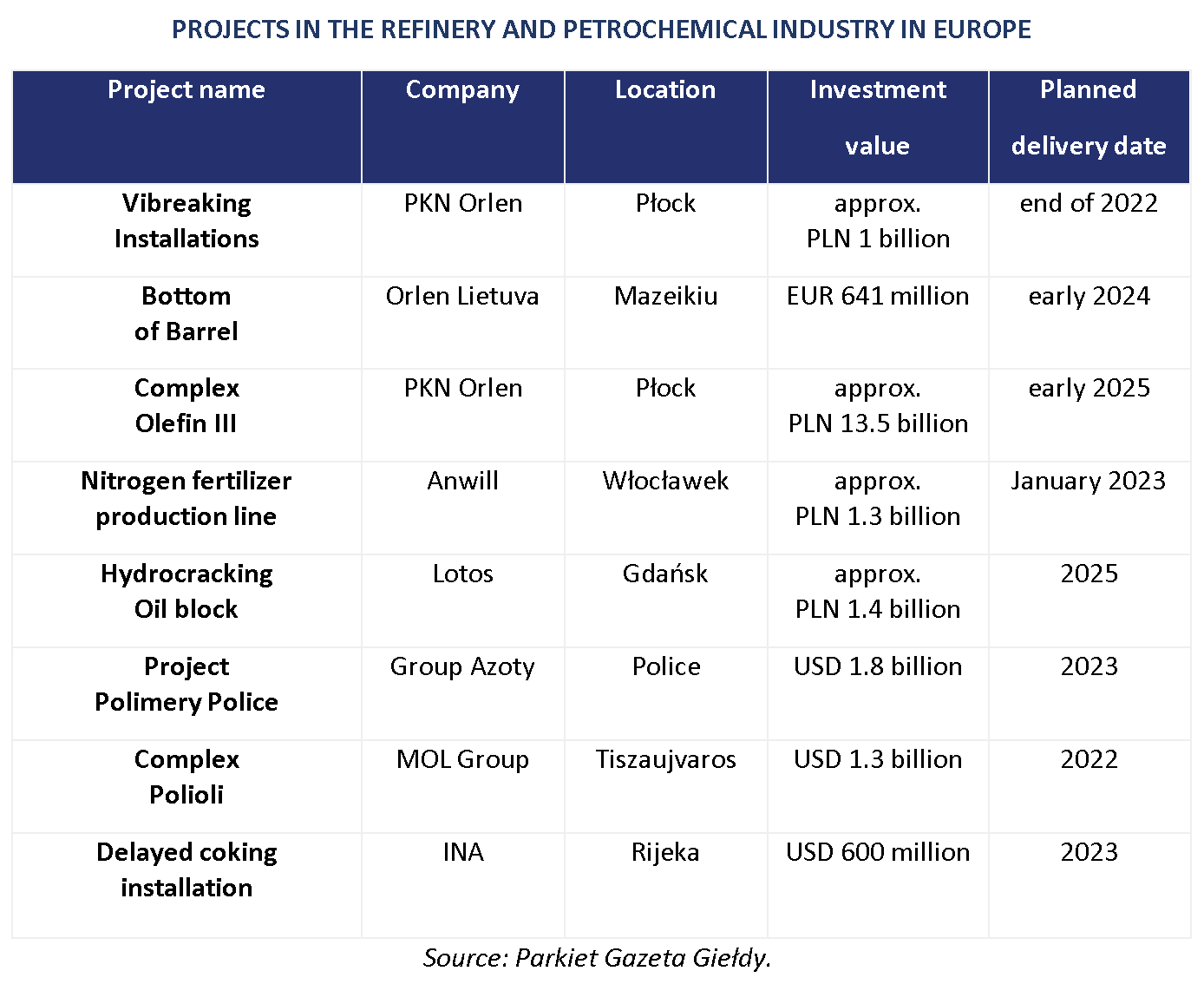 The most extensive program to modernise refining and petrochemical installations in Central and Eastern Europe is Olefin III of the Orlen group, worth approx. PLN 13.5 billion. Its goal will be to process various semi-finished products resulting from crude oil processing, for which it needs approx. 1 million tons, most of which will be provided by the refineries belonging to the group.

According to POPiHN (Polish Organization of Oil Industry and Trade) estimates, the value of retail sales of motor fuels in Poland in 2020 amounted to approx. PLN 109 billion. The fuel volume sold at the stations was initially estimated at 26.7 billion litres (motor gasoline, diesel oil and autogas). The budget revenues from taxes paid on this sale (VAT, excise duty, fuel duty, emission fee) amounted to approx. PLN 65 billion.

The structure of the Polish fuel station market at the end of 2020 was as follows:

In 2020, as in previous years, PKN ORLEN had the largest number of stations in Poland. BP was ranked second, followed by Grupa LOTOS. Although on a smaller and smaller scale, domestic companies still operated under four brands: ORLEN and BLISKA in the case of PKN ORLEN, LOTOS and LOTOS OPTIMA in the case of Grupa LOTOS. ORLEN stations with the BLISKA logo lost 11 stations, and at the end of the year, there were only 25. The number of economic stations of Grupa LOTOS decreased by 8, falling to 186. The number of stations operating under the logo of foreign companies operating in Poland increased. At the end of 2020, as many as 1,569 stations were operating under their brands – 26 more than in the previous year. Among the independent petrol stations, the best dynamics was recorded for the MOYA chain, Pieprzyk Group, and AVIA.

Due to the expanding network of expressways and highways and the growing desire to use the possibility of fast travel, the number of petrol stations on Polish highways has increased. In 2020, there were 90 of them, which is 6 more than in 2019. The PKN Orlen stations, located at 36 points next to the Passenger Service Areas, have the largest share in this category. Grupa LOTOS had 23 facilities, BP – 16, SHELL – 12, and CircleK – 2.

It is worth noting that fuel prices on expressways and highways usually are much more expensive than in other points. Nevertheless, drivers use them anyway, not wanting to waste time looking for alternative, cheaper points near the main road.